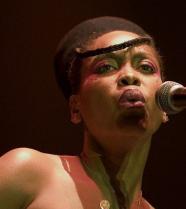 Erica Abi Wright (born February 26, 1971), better known by her stage name Erykah Badu, is an American recording artist, record producer and actress. Her work includes elements from R&B, hip hop and jazz. She is best known for her role in the rise of the neo soul sub-genre, and for her eccentric, cerebral musical stylings and sense of fashion. She is known as the "First Lady of Neo-Soul" or the "Queen of Neo-Soul".

Early in her career, Badu was recognizable for wearing very large and colorful headwraps. For her musical sensibilities, she has often been compared to jazz great Billie Holiday. She was a core member of the Soulquarians, and is also an actress having appeared in a number of films playing a range of supporting roles in movies such as Blues Brothers 2000, The Cider House Rules, and House of D, she is also very prominent in the documentary film Before the Music Dies.