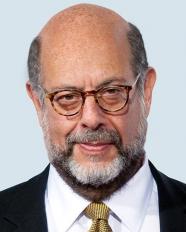 He was born in New York City, and received his theatrical training at Hampshire College and the Yale School of Drama. At Yale, he was a Samuel F. B. Morse College Graduate Fellow. He was also a nominee for the Irene Ryan Award, a prize conferred upon the most promising young actors in the United States. While still at Yale, he was an instructor at the well-known performing arts camp, Stagedoor Manor. After his training, he appeared on stage with several resident theatre companies, including The Guthrie Theater, The Kennedy Center For The Performing Arts, The Yale Repertory Theater, and on Broadway in the Tony Award-Winning Amadeus. Following Amadeus, Melamed entered what he called "a period of personal darkness", during which he effectively stopped acting on stage. At the same time, he became established as a vocal actor, and continued to do film work.

Melamed's voice became a familiar presence on television, serving as the sound of the Olympics, Mercedes Benz, CBS Sports, USA Network, the Superbowl, and numerous commercials and television programs. He became known within the industry as a voice actor, appearing in the Grand Theft Auto series, and dubbing several actors' entire performances in films. But it was for his portrayal of "sensitive" villain Sy Ableman, in Joel and Ethan Coen's 2009 film, A Serious Man, which was nominated for Best Picture, at the 2010 Academy Awards, that he became most widely known. About that character, Film Confessional said, "Sy Ableman is as great a contemporary movie villain as The Joker, Hans Landa, or Anton Chigurh...The character Fred Melamed contrives is the year's most brilliant force of destruction."

For his somewhat titular performance in A Serious Man, Melamed, along with the Coen Brothers, the film's Ensemble and Casting Directors, won Film Independent's Independent Spirit Robert Altman Award. New York Magazine listed Melamed's work as among the Best Performances of 2009, and Empire called Sy Ableman "One of The Best Alternative Coen Characters of All Time". Several leading U.S. critics, including A.O. Scott of The New York Times, Michael Philips of The Chicago Tribune and Roger Ebert said his performance was worthy of Academy Award nomination.

In addition, Melamed has appeared in a host of Woody Allen films, including Hannah and Her Sisters, Radio Days, Another Woman, Crimes and Misdemeanors, Shadows and Fog, Husbands and Wives, and Hollywood Ending. He has also played significant supporting roles in Suspect, The Good Mother, The Mission, The Pickup Artist and other films.

He is slated to star in the stoner odyssey, Harold & Kumar 3, and as Elliot Gould's son, auteur/director Bob Wilson, in the upcoming independent film, Fred, a movie about a stubborn patriarch and the family that must grapple with him.

As a writer, he has produced screenplays including Girl of the Perfume River, A Jones for Gash, The Asshat Project, and most recently, The Preservationist, a fictional film inspired by the case of Melamed's college friend, Edward Forbes Smiley III, a renowned cartographic expert and dealer, who admitted to having been the most brazen and prolific map thief of all time.

He lives with his wife and twin sons on the East End of Long Island. Both of the Melamed children were born with autism, and Melamed and his wife have been involved in advocacy for persons living with Autism Spectrum Disorder and their families.

Description above from the Wikipedia article Fred Melamed, licensed under CC-BY-SA, full list of contributors on Wikipedia.
2009 - A Serious Man
2013 - In a World...
2018 - The Spy Who Dumped Me