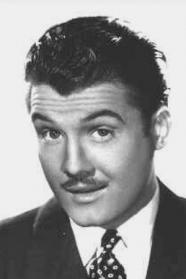 George Reeves (January 5, 1914 – June 16, 1959) was an American actor best known for his role as Superman in the 1950s television program Adventures of Superman.

His death at age 45 from a gunshot remains a polarizing issue. The official finding was suicide, but some believe he was murdered or the victim of an accidental shooting.

Description above from the Wikipedia article George Reeves, licensed under CC-BY-SA, full list of contributors on Wikipedia
1940 - Gone With the Wind