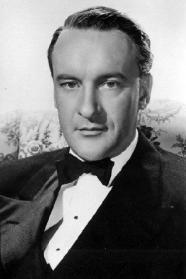 From Wikipedia, the free encyclopedia. George Henry Sanders (3 July 1906 – 25 April 1972) was a Russian-born English film, and television actor, singer-songwriter, and music composer. He was widely known for his roles of cads and other darkly drawn characters in many successful films, most of all as Addison DeWitt in All About Eve (1950) and the villainous tiger Shere Khan in The Jungle Book (1967). His career spanned over 40 years.

Description above from the Wikipedia article George Sanders, licensed under CC-BY-SA, full list of contributors on Wikipedia.
1950 - All About Eve
1964 - A Shot In The Dark