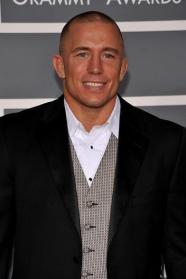 Georges St-Pierre was born on May 19, 1981 in Saint-Isidore, Quebec, to Jim and Paulyne St-Pierre. St-Pierre had a difficult childhood, attending a school where others would steal his clothes and money.[9] He started learning Kyokushin karate at age seven from his father and later from a Kyokushin Karate Master to defend himself against a school bully. He took up wrestling and Brazilian Jiu-Jitsu after his karate teacher died and also trained in boxing. Before turning pro as a mixed-martial artist, St-Pierre worked as a bouncer at a Montreal night club in the South Shore called Fuzzy Brossard and as a garbageman for six months to pay for his school fees.

St-Pierre has trained with a number of groups in a large variety of gyms throughout his fighting career. Prior to his fight with B.J. Penn at UFC 58, he trained at the Renzo Gracie Jiu-Jitsu Academy in New York City. St-Pierre received his brown belt in BJJ from Renzo Gracie on July 21, 2006. In September 2008, St-Pierre earned his black belt in Brazilian Jiu-Jitsu under Bruno Fernandes.
2014 - Captain America: The Winter Soldier
2016 - Kickboxer: Vengeance