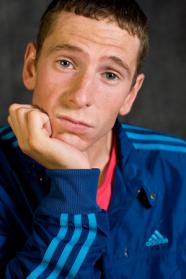 Gerard Kearns (born 4 October 1984) is an English actor. He has appeared in film and television. He played Ian Gallagher, one of the original characters in Channel 4's Shameless, for 6 years.

Description above from the Wikipedia article Gerard Kearns, licensed under CC-BY-SA, full list of contributors on Wikipedia.
2010 - Looking for Eric
2016 - Trespass Against Us