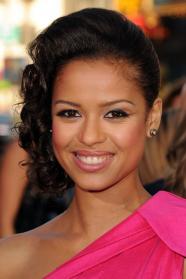 Gugu, short for Gugulethu which is Zulu for "Our Pride", was born in the John Radcliffe Hospital, Oxford, England. Her mother, Anne Raw, is a Caucasian English nurse, and her father, Patrick Mbatha, is a Black South African doctor. Her parents separated when she was a year old, and she was brought up by her mother in the town of Witney, Oxfordshire (she is still close to her father). She joined the local acting group Dramascope and, from the age of eleven, appeared in the pantomime at Oxford Playhouse every year. A talented singer and dancer as well as playing the saxophone, she joined the Oxford Youth Music Theatre in her teens. In 2001 she won a scholarship to the Royal Academy of Dramatic Art (RADA) in London. Since graduation in 2004 she has appeared in all media, including as an acclaimed Juliet in "Romeo and Juliet" at Manchester's Royal Exchange Theatre and on television in such varied series as Les condamnées (1999), Doctor Who (2005) and "Marple". - IMDb Mini Biography
2014 - Odd Thomas
2014 - Belle
2014 - Beyond the Lights
2015 - Concussion
2016 - Free State of Jones
2016 - The Whole Truth
2016 - Miss Sloane
2017 - Beauty and the Beast
2018 - The Cloverfield Paradox (aka: God Particle)
2018 - Irreplaceable You
2018 - A Wrinkle in Time