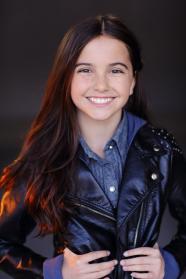 Hannah was born on July 13, 2003 in Vancouver, B.C.. She began performing at an early age, doing song and dance routines by the age of 3. She knew early on that she wanted to be a performer and was acting in local children's theatre productions by the age of 7. Hannah started acting professionally in 2014, with numerous commercials and two movies in her first year.
2017 - Colossal