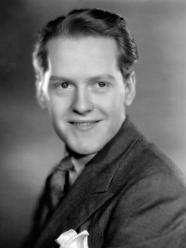 Born as Hardie Hunter Albrecht, he made his stage debut in one of his parents' acts at the age of 7.

Albright was playing the juvenile lead on the stage in The Greeks when a scout from the Fox Company saw him. He was given a contract and headed for Hollywood. An alumnus of Carnegie Tech, Albright made his film debut in 1931 in John G. Blystone's Young Sinners. He appeared in numerous films after that, including as the voice of the adolescent Bambi in the film of the same name. He also became a noted Broadway actor.

He retired from film acting in 1948 and became a drama instructor at USC, writing several books on acting and directing during his time there.

During the 1960s he made many guest appearances on television series such as Bewitched and Gunsmoke.

On December 7, 1975, just nine days shy of his 72nd birthday, Albright died from congestive heart failure in Mission Viejo, California. He was survived by his daughter Victoria from his first marriage to wife Martha Sleeper.

Description above from the Wikipedia article Hardie Albright, licensed under CC-BY-SA, full list of contributors on Wikipedia
1942 - Bambi