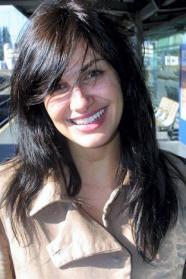 From Wikipedia, the free encyclopedia Helena Noguerra (Brussels, 18 May 1969) is a Belgian actress, singer and television presenter of Portuguese descent. She is the sister of singer Lio. Her songs have been used in commercials and television programmes such as Lunettes noires pour nuits blanches by Thierry Ardisson (1988–1990). She sang on the 2010 video game Bayonetta, including both the game's main theme and a cover of Fly Me to the Moon. In 2010 she toured with French band Nouvelle Vague. Description above from the Wikipedia article Helena Noguerra, licensed under CC-BY-SA, full list of contributors on Wikipedia.
2007 - Dans Paris