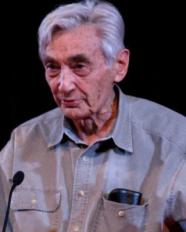 Howard Zinn (August 24, 1922 – January 27, 2010) was an American historian, academic, author, playwright, and social activist. He specialized in the labor history of the United States in the 20th century. In his tenure as a political science professor at Boston University from 1964-88 he wrote more than 20 books, which included his best-selling and influential A People's History of the United States. He wrote extensively about the Civil Rights, civil liberties and anti-war movements. His memoir, You Can't Be Neutral on a Moving Train, was also the title of a 2004 documentary about Zinn's life and work.

Description above from the Wikipedia article Howard Zinn, licensed under CC-BY-SA, full list of contributors on Wikipedia.
2007 - Sacco And Vanzetti