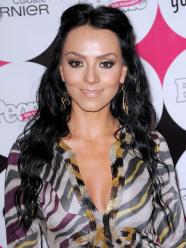 Ivonne Montero (born Ivonne Garcia Macedo Montero on April 25, 1974) is a Mexican actress and model best known for her leading role in ¡Anita, no te rajes! (Anita don't Give Up!) in 2004. She has portrayed various other roles in telenovelas, and has appeared in several serials, including Rosalinda, Las vías del amor, Decisiones, and El Juego de la Vida. She plays the struggling single mom Maité Contreras in Telemundo's Sin Vergüenza.
In 2008, she appeared in the Sci-Fi Original, The Wild Reporter.
In May 2008 she posed nude for the men's magazine H Extremo the uncensored version of H.
In October 2008 she returned to Mexico to star alongside Humberto Zurita in the soup opera called Secretos del Alma on TvAzteca. In April 2009, she participated in the reality show El Gran Desafio, also on TvAzteca.
In 2010 Ivonne montero worked on the telenovela La Loba with Mauricio Islas.

Description above from the Wikipedia article Ivonne Montero, licensed under CC-BY-SA, full list of contributors on Wikipedia.
2007 - Ladrón que roba a ladrón