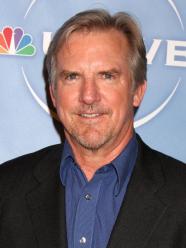 James Patrick "Jamey" Sheridan (born July 12, 1951) is an American actor. He was born in Pasadena, California.

He has had a prolific acting career in theater, television, and feature film productions. Born to a family of actors, he made it to Broadway and earned a Tony nomination in 1987 for his performance in the revival of Arthur Miller's All My Sons. After several TV movie appearances, Sheridan landed a starring role as lawyer Jack Shannon on Shannon's Deal, which ran for one season in 1990. His later television roles include Dr. John Sutton on Chicago Hope (from 1995–1996).

Sheridan started his film career in the late 1980s with small roles. By the 1990s, he was playing the token family man, a role he would continue in both film and television, such as 1991's All I Want for Christmas. He also has played villains. In 1994 he played the character of Randall Flagg in the 1994 miniseries adaptation of Stephen King's The Stand. Other roles include Marty Stouffer in Wild America and the psychotic neighbor in Video Voyeur: The Susan Wilson Story. After a long history of performing Shakespeare on the stage, Sheridan appeared in Campbell Scott's production of Hamlet in 2000 as well as the Hamlet-inspired modern noir film Let the Devil Wear Black (1999). He co-starred in the improvisational film The Simian Line in 2001. He has also given supporting performances in The Ice Storm, Cradle Will Rock, Life as a House, and numerous TV movies.

More recently, Sheridan played Capt. James Deakins in the television series Law & Order: Criminal Intent. Late in the 2004–2005 season, Sheridan began wearing an eyepatch as he began showing the symptoms of Bell's palsy. This was written into the show; however, Deakins was written out of the series at the end of the 2005-2006 season, at Sheridan's request. His character was replaced by Capt. Danny Ross, played by Eric Bogosian.

Since the fall of 2009, Sheridan has starred in NBC's new series Trauma as Dr. Joseph "Joe" Saviano. In 2010 Sheridan starred in the movie Handsome Harry, a drama. He will also be joining an ensemble cast in the political film Game Change, playing speechwriter Mark Salter.

Sheridan and his wife, actress Colette Kilroy, have three children.
Description above from the Wikipedia article Jamey Sheridan, licensed under CC-BY-SA, full list of contributors on Wikipedia.
1999 - Cradle Will Rock
2015 - Spotlight