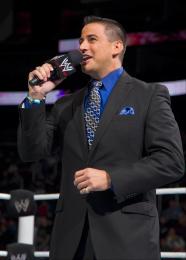 Justin Jason Roberts is an American ring announcer for WWE. He works on the WWE Raw television show.

Roberts began watching wrestling, after he saw an edition of Saturday Night's Main Event and met Kerry Von Erich and The Ultimate Warrior at a hotel in Wisconsin. The combined events inspired Roberts to become a fan of professional wrestling. He also briefly trained as a refree so he could be in the same ring as Curt Hennig, of whom he was a big fan.

Roberts began ring announcing at age 16 for local professional wrestling promotion Pro Wrestling International, and announced his first match in November 1996. While studying Media Arts and Communications at the University of Arizona from 1998 to 2002, Roberts worked for other independent promotions such as the American Wrestling Alliance, All Pro Wrestling, and Impact Zone Wrestling. During this time, he also announced for the Toughman Contest.

In 2002, he got a job in SmackDown, followed later by a move to the Raw brand. He also worked on Velocity and Heat shows while touring as the full-time Raw live event announcer. Most notably, Roberts announced the ECW show each week on the Sci-Fi Network until September 2007, before swapping with SmackDown's Tony Chimel. Roberts reached the peak of his profession when he announced the main event of WrestleMania XXIV between Edge and The Undertaker on March 30, 2008. In addition to announcing SmackDown and pay-per-view matches, Roberts would also announce on WWE Superstars, including its inaugural episode on April 16, 2009.

Beginning on September 28, 2009, Roberts took over the Raw announcing duties from the departing Lilian Garcia. On the June 7, 2010 episode of Raw, Roberts was attacked by the rookie wrestlers who had competed in the first season of WWE NXT. During the segment, Roberts was strangled with his own tie by Daniel Bryan, which led to Bryan's release, as WWE felt the incident was too violent for their TV-PG programming. At the SummerSlam pay-per-view two months later however, Bryan returned to WWE. At WrestleMania XXVII, Roberts worked as the sole announcer for the whole show, with the exception of the announcement of the Hall of Fame class of 2011, which was announced as usual by Howard Finkel.
2006 - Tenacious D In The Pick Of Destiny