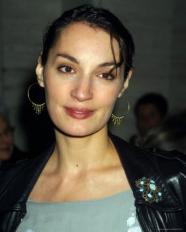 Jeanne Balibar (born 13 April 1968) is a French actress and singer.

She was born in Paris. She began her acting career on the stage, in "Don Juan" at the Festival d'Avignon. Her first film role was in Arnaud Desplechin's 1992 film The Sentinel. She continues to perform in both spheres.

She is the daughter of Étienne Balibar, French Marxist philosopher and physicist Françoise Balibar.