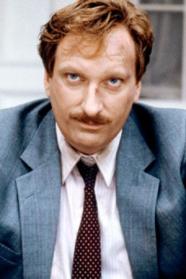 From Wikipedia, the free encyclopedia. Jeffrey Duncan Jones (born September 28, 1946) is an American actor. He has appeared in many films and television shows, but may be best known for his roles as Emperor Joseph II in Miloš Forman’s Amadeus, Charles Deetz in Beetlejuice, and dean of students Edward R. Rooney in the 1986 John Hughes film Ferris Bueller's Day Off. Description above from the Wikipedia article Jeffrey Jones, licensed under CC-BY-SA, full list of contributors on Wikipedia.
1988 - Beetlejuice
1994 - Ed Wood
1997 - The Devil's Advocate