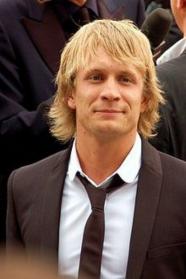 From Wikipedia, the free encyclopedia. Jérémie Renier (born 6 January 1981) is a Belgian actor. He lives in Paris, France.  His film debut was in the critically praised La Promesse (1996), directed by Luc and Jean-Pierre Dardenne. He became better known to worldwide audiences in Brotherhood of the Wolf (2001) and L'Enfant (2005). The latter was also directed by the Dardenne brothers.