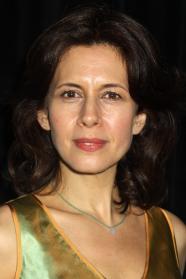 Jessica Hecht (born June 28, 1965) is an American actress. Hecht was born in Bloomfield, Connecticut, the daughter of Lenore, a psychotherapist, and Richard Hecht, a physicist. She graduated in 1987 from the NYU Tisch School of the Arts, earning a Bachelors of Fine Arts in Drama. She has made appearances in television shows such as ER, Seinfeld, Once and Again, Law & Order, Breaking Bad and The Good Wife; and in movies such as Sideways, Anarchy TV, Kicking and Screaming and Starting Out in the Evening. Hecht is perhaps best known for her recurring role on Friends as Susan Bunch, the lesbian life partner of Ross Geller's ex-wife, Carol Willick. She was also a featured cast member in the Jonathan Silverman sitcom The Single Guy. Recently, she starred in a supporting role as Amy Burns in the 2007 comedy-drama Dan in Real Life, co-starring with Steve Carell and Juliette Binoche, and also in 2009's Whatever Works directed by Woody Allen. She has been married to Adam Bernstein, a U.S. film director, since 1995. They have two children together, Stella and Carlo Bernstein. She most recently appeared in A View From The Bridge on Broadway with Scarlett Johansson and Liev Schrieber, which wrapped on April 4, 2010. She also has a semi-recurring role as Gretchen Schwartz on the popular AMC drama series Breaking Bad.

Description above from the Wikipedia article Jessica Hecht, licensed under CC-BY-SA, full list of contributors on Wikipedia.
2007 - Starting Out in the Evening