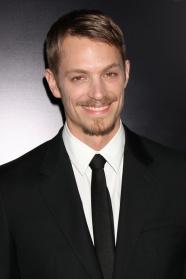 Joel Kinnaman (born Charles Joel Nordström; 25 November 1979) is a Swedish-American actor from Stockholm. He is best known for playing the lead role in the Swedish film Easy Money and for his role as Frank Wagner in the Johan Falk film series – a role that earned him a Guldbagge Award nomination in the "Best Supporting Actor" category. As of 2012 he stars in AMC's The Killing.