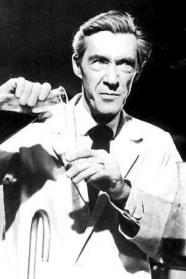 John Carradine (born Richmond Reed Carradine; February 5, 1906 – November 27, 1988) was an American actor, best known for his roles in horror films and Westerns as well as Shakespearean theater. He was one of the most prolific character actors in Hollywood history and the patriarch of an acting dynasty that includes four of his sons and four of his grandchildren.

Description above from the Wikipedia article John Carradine, licensed under CC-BY-SA, full list of contributors on Wikipedia.
1981 - The Howling (1981)