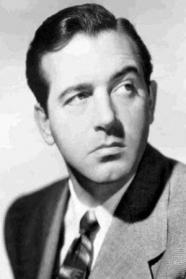 John Payne (May 23, 1912 – December 6, 1989) was an American film actor who is mainly remembered as a singer in 20th Century Fox musical films, and for his leading roles in Miracle on 34th Street and the NBC western television series, The Restless Gun.

Description above from the Wikipedia article John Payne (actor), licensed under CC-BY-SA, full list of contributors on Wikipedia​
1947 - Miracle On 34th Street