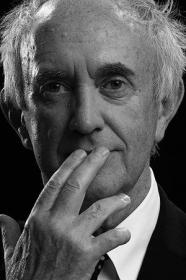 Jonathan Pryce, CBE (born 1 June 1947) is a Welsh stage and film actor and singer. After studying at the Royal Academy of Dramatic Art and meeting his long time partner English actress Kate Fahy in 1974, he began his career as a stage actor in the 1970s. His work in theatre, including an award-winning performance in the title role of the Royal Court Theatre's Hamlet, led to several supporting roles in film and television. He made his breakthrough screen performance in Terry Gilliam's 1985 cult film Brazil.
Critically lauded for his versatility, Pryce has participated in big-budget films such as Evita, Tomorrow Never Dies, Pirates of the Caribbean and The New World, as well as independent projects such as Glengarry Glen Ross and Carrington. His career in theatre has also been prolific, and he has won two Tony Awards—the first in 1977 for his Broadway debut in Comedians, the second for his 1991 role as "The Engineer" in the musical Miss Saigon.