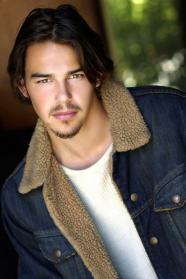 Jonathon Trent, born June 5, 1984, in Los Angeles, California, is an American actor, best known for his role as Joey in the Allan Brocka drama, Boy Culture (2006). Trent's first acting role came in 2004 as Flynn in the movie, Delusion (2004). He followed that up with lead roles in the movies Screech, Miracle Dogs, Love Is the Drug, Pray for Morning and Boy Culture, among others. In 2006, Trent landed his first television role as Kyle in the American teen drama,