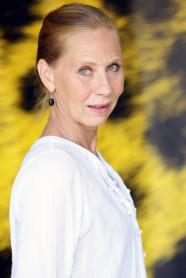 Outinen was born in Helsinki. Having studied under Jouko Turkka during his "reign" of drama studies in Finland, she nevertheless has never been associated with the "turkkalaisuus" school of acting methodology. Her breakthrough role was as a tough girl in the generational classic youth film Täältä tullaan elämä by Tapio Suominen.

Besides a strong domestic reputation gained through a widely varied list of roles in theater and television drama, film director Aki Kaurismäki's films have brought Outinen international attention and even adulation, particularly in Germany and France.

At the 2002 Cannes Film Festival, Outinen won the award for Best Actress for the Kaurismäki film The Man Without a Past.

Description above from the Wikipedia article Kati Outinen, licensed under CC-BY-SA, full list of contributors on Wikipedia.
- Sauna
2017 - The Other Side of Hope