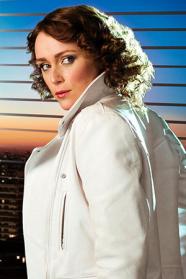 Keeley Hawes  (born 10 February 1976) is an English actress and model, known for many television roles, notably those of Zoe Reynolds in Spooks (2002–04) and Alex Drake in Ashes to Ashes (2008–10). Hawes is also known for voicing various roles in video games, such as the iconic Lara Croft from the long running Tomb Raider series.

She is also well known for the charity work she does for CHASE hospice care for children in Surrey. Hawes first came into the public eye in the early 1990s, in 1990's Troublemakers and the 1992 BBC costume drama, The Moonstone. She has since appeared in many other television dramas, including Dennis Potter's Karaoke (BBC One/Channel 4, 1995), Heartbeat (ITV1, 1995), The Beggar Bride (BBC, 1997), Othello (ITV, 2001), A Murder is Announced (ITV, 2005), ITV drama After Thomas (2006), BBC drama Spooks, ITV biopic Blonde Bombshell (1999), and quite recently played time-travelling DI Alex Drake in the hit BBC drama series Ashes to Ashes (2008–2010), the sequel to Life on Mars.

She is currently the face of Boots No 7 cosmetics and has appeared alongside David Mitchell and Robert Webb in the BAFTA award winning That Mitchell and Webb Look. She has recently appeared in a new 6-part drama for ITV called Identity as Detective Superintendent Martha Lawson; and as the leading role 'Lady Agnes Holland' in the re-launch of Upstairs, Downstairs for the BBC.

Description above from the Wikipedia article Rachael Stirling, licensed under CC-BY-SA, full list of contributors on Wikipedia
2006 - Tristram Shandy: A Cock And Bull Story
2016 - High-Rise