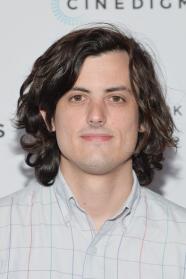 Born in Fresno, California, but moved around several times as a kid, living in Arizona, New Mexico and Texas. Poulson went Tascosa High School in Amarillo, Texas and to the University of Texas at Austin, where he received degrees in Radio-Television-Film and English. After graduating, Keith was hired on by the Austin Film Society, a non-profit founded by Richard Linklater.
2012 - Somebody Up There Likes Me
2013 - Red Flag
2018 - Golden Exits