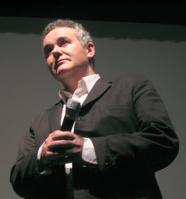 Adam Curtis (born 1955) is an award-winning British documentarian and writer. He has also worked as a television producer, director and narrator. He works for BBC Current Affairs. His programmes express a clear, albeit sometimes controversial, opinion about their subject.

Description above from the Wikipedia article Adam Curtis, licensed under CC-BY-SA, full list of contributors on Wikipedia.
2014 - Take Care