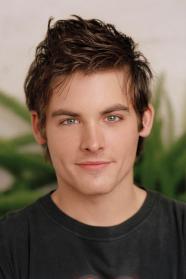 Kevin Joseph Zegers (born September 19, 1984) is a Canadian actor and model. He is best known for his leading roles as Josh Framm in the Air Bud series, as well as playing Damien Dalgaard in the Gossip Girl series and the protagonist in Rock Mafias The Big Bang.

On August 3rd, 2013, Zegers married Jaime Feld, an agent who was his girlfriend for several years.