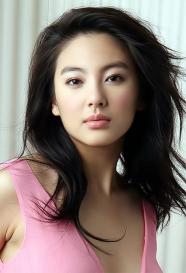 Zhang was born in Shandong province. She left Shandong at age 15 to attend acting school in Shanghai.
Zhang appeared in a minor, uncredited role in the 2007 film The Longest Night in Shanghai. Stephen Chow first noticed her in an advertisement for Kentucky Fried Chicken, and chose her to play the female lead in CJ7. The role brought her her first major media attention, and because of Chow's tradition of starring alongside new actresses who later gain other major roles, Zhang has been called one of the "星女郎" (xīng nǚ láng, "star girls" or "Sing girls"—Sing Yeh is a common nickname of Chow's).
After CJ7, Zhang appeared in the Japanese film Shaolin Girl (which was also produced by Chow) and had a major role in the Chinese film All About Women. Chow considered casting her in Dragonball Evolution, but the role was ultimately given to another actress. Zhang also acted in the Stephen Fung film Jump, and is set to appear in Journey to the West, a film based on the classic Chinese novel of the same name. In the film she will play the monk Xuanzang, traditionally portrayed as a male, and will again star alongside Chow (who also starred in A Chinese Odyssey, a pair of 1994 films parodying Journey to the West).
2008 - CJ7 (Cheung Gong 7 hou)