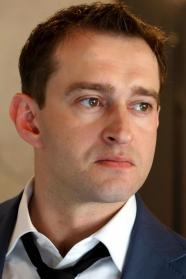 Konstantin Khabensky (born 11 January 1972) is a Russian actor best known in the West for starring in the films Night Watch and Day Watch as the lead character Anton Gorodetsky.

Khabensky was born and trained in St Petersburg, and now resides in Moscow. Khabensky was already a popular and well-established theatre and television/film actor prior to appearing in the -Watch films. However, their unprecedented success in both Russia and worldwide has made Khabensky the most popular actor in Russia, and one of the best-known Russian actors in the West.

Khabensky has been a stage actor in Satyricon Theatre (Moscow) and Lensovet Theatre in Saint Petersburg. In 1995-1996, he worked as presenter of regional TV in the department of music and information programs. Since 2003, Khabensky has been a member of Moscow Art Theatre stage cast, and a lead actor in Duck Hunt (Zilov), Mikhail Bulgakov's White Guard (Alexey Turbin) and Hamlet. Graduated from the Leningrad State Institute for Theatre, Music and Cinema in 1996 (course of V. Filshtinsky).