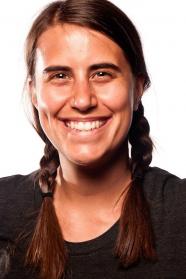 Kristin "Kris" Williams Swanberg is an American businesswoman, filmmaker, actress and former high school teacher living in Chicago, Illinois. She is best known for her work with her husband, Joe Swanberg, on the independent digital feature film Kissing on the Mouth (2005), in which she starred as Laura, and on the Nerve.com web series, Young American Bodies, in which she stars as Dia. Her personal projects include the short documentary "Bathwater" (2006) and the Nerve.com documentary web series "Boys and Girls". In 2005, she coordinated The Future Filmmakers Festival, which showcases work from filmmakers under the age of 21. She is credited variously as both Kris Williams and Kris Swanberg.