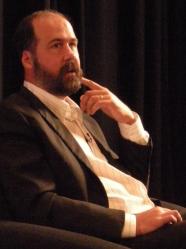 Krist Anthony Novoselic II (Croatian: Novoselić; born May 16, 1965) is a Croatian-American rock musician, best known for being the bassist and co-founder of the grunge band Nirvana. In addition to Nirvana, Novoselic has played for Sweet 75, Eyes Adrift, and most recently in Flipper. Apart from his musical endeavors, Novoselic has been active politically, including the creation of the political action committee JAMPAC. From November 2007 until September 2010, Novoselic wrote a weekly column on music and politics for Seattle Weekly's website.

Description above from the Wikipedia article Krist Novoselic, licensed under CC-BY-SA, full list of contributors on Wikipedia​
2015 - Kurt Cobain: Montage of Heck