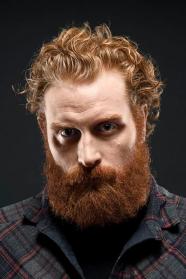 Kristofer Hivju is a Norwegian actor, producer and screenwriter who has experience in theater, television, radio and film. He is the son of actor Erik Hivju. Hivju has had roles in television series such as Fox Grønland and Seks som oss, the movie Rovdyr and written scripts for short films Closework in 2005 and Flax from 2008. He completed in 2004 a four-year degree in theater arts at the Russian State Academy of Theatre Art (GITIS) in Denmark.
2016 - In Order of Disappearance
2017 - The Fate of the Furious