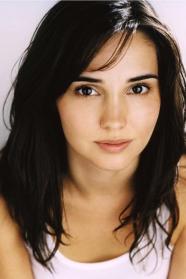 Laura Breckenridge (born August 22, 1983) is an American actress born in Flourtown, Pennsylvania, most noted for her portrayal of 19-year-old college student Rose Sorelli on The WB's Related. The role of a young woman who switches her major from pre-med to experimental theater is not exactly a stretch for Breckenridge, who appeared on Broadway in the 2002 revival of Arthur Miller's The Crucible (also in the cast was another rising young star, Kristen Bell of UPN's Veronica Mars). At an early age she appeared in the movie Loving Annabelle, a dramatic movie in which a Catholic school teacher falls in love with one of her girl students. She plays a teenager who is very troubled and cuts her wrists. Laura currently attends Princeton University, class of 2010. She had a guest role on Gossip Girl as teacher Rachel Carr. On February 24, 2011, Breckenridge guest starred on Grey's Anatomy.
2008 - Let Them Chirp Awhile
2009 - Amusement