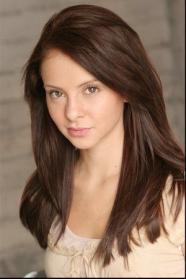 Laura Ortiz (born April 27, 1987) is an American actress, who appeared as Ruby, one of the deformed hill people in The Hills Have Eyes (2006). She was also the chatty caffeinated cheerleader named Ashley Hall in a television advertisement for T-Mobile. So far, only two T-Mobile ads featuring Ortiz have aired. She was born in Bogotá, Colombia but currently resides in California. She has been professionally acting for about two years and already has appeared in various TV shows such as Sleeper Cell and Injustice. She has also starred as the voice of Vickie the siren in American Dragon: Jake Long for Disney. Laura Ortiz has also appeared in Norbit with Eddie Murphy. She went to Cypress Lake High School in Fort Myers, Florida.and up coming sWeAt. She also stars in Hortons Hears a Who! animated film which she voiced for the character Jessica.
2018 - Victor Crowley