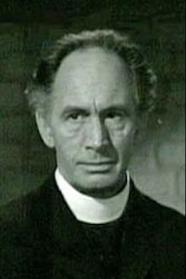 Leonard Mudie (11 April 1883–14 April 1965) was an English
character actor whose career lasted for nearly fifty years. After a successful
start as a stage actor in England, he appeared regularly in the US, and made
his home there from 1932. He appeared in character roles on Broadway and in
Hollywood films.

Mudie made his film debut in a Boris Karloff film, The Mummy
in 1932. He moved to Hollywood in that year, and lived there for the rest of
his life. He played a range of screen parts, some substantial, and others short
cameos. Among the bigger roles were Dr Pearson in The Mummy, Porthinos in
Cleopatra (1934), Maitland in Mary of Scotland (1936), and De Bourenne in
Anthony Adverse (1936). His small roles, according to The New York Times, were
typically "a bewigged, gimlet-eyed British judge".

Mudie made the post-war transition into television, and
appeared in several episodes of Adventures of Superman. For the post-war cinema
he played the regular character Commander Barnes in the series of Bomba, the
Jungle Boy films.
1932 - The Mummy (1932)