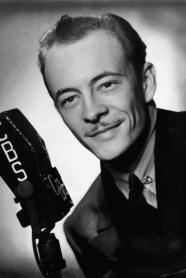 Les Tremayne (16 April 1913 – 19 December 2003) was a radio, film, and television actor. Born Lester Tremayne in England, he moved with his family at the age four to Chicago, where he began in community theater. He danced as a vaudeville performer and worked as amusement park barker. He began working in radio when he was 17 years old.

Description above from the Wikipedia article Les Tremayne, licensed under CC-BY-SA, full list of contributors on Wikipedia.​
1953 - The War Of The Worlds (1953)