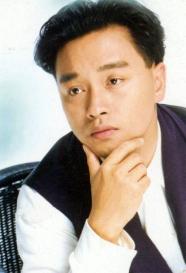 Leslie Cheung (12 September 1956 – 1 April 2003) was a Hong Kong singer-songwriter, actor, film director, record producer, and screenwriter. Cheung is considered as "one of the founder fathers ofCantopop" by "combining a hugely successful film and music career."He rose to prominence as a teen heartthrob and pop icon of Hong Kong in the 1980s, receiving numerous music awards including bothMost Popular Male Artist Awards at the 1988 and 1989 Jade Solid Gold Best Ten Music Awards.In 1989, Cheung announced his retirement from the music industry as a pop singer. Returning to the music scene after a five-year hiatus, Cheung released his chart-topping comeback album which achieved a huge market success. In 1999, he won the Golden Needle Award for his outstanding achievement as a musician at the RTHK Top 10 Gold Songs Awards,and his 1984 hit song Monica was voted as Hong Kong's "Song of the Century".He was honoured as "Asia's Biggest Superstar" at the 2000 CCTV-MTV Music Honours. Cheung won the 1991 Hong Kong Film Award (Days of Being Wild)and the 1994 Hong Kong Film Critics Society Award (Ashes of Time) for best actor. He had also won the 1994 Japan Film Critics Society Award for best actor for his performance in Farewell My Concubine and ten other best actor nominations, five Golden Horse Awards, three Cannes Film Festival Awards,a Asia Pacific Film Festival Award, and a Venice Film Festival Award. Cheung's music and movies not only captured fans in Hong Kong but also other Asian countries including Taiwan, Singapore, Malaysia, China, Japan and South Korea. He is the first foreign artist to hold 16 concerts in Japan that has yet to be broken and the record holder as the best-selling C-pop artist in Korea. Cheung was ranked as the favourite actor in the 100 years of Chinese cinema. In 2010, he was voted the third "Most Iconic Musicians of All Time" (after Michael Jackson and The Beatles).CNNconsidered Cheung as the "Most Beautiful Man from Hong Kong Cinema" and one of "Asia's 25 Greatest Actors of All Time."
1986 - A Better Tomorrow (Ying huang boon sik)
2004 - Days Of Being Wild
2008 - Ashes of Time Redux