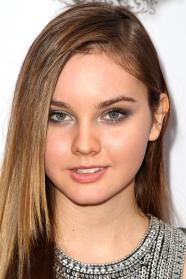 Liana Daine Liberato (born August 20, 1995 in Galveston, Texas) is a young American television and film actress. She starred in the Fox Faith film The Last Sin Eater and recently appeared in the House episode "It's a Wonderful Lie". She was featured in the cover story of the June 4, 2006 issue of The New York Times Magazine titled "Hollywood Elementary" with her friend Hannah Marks.