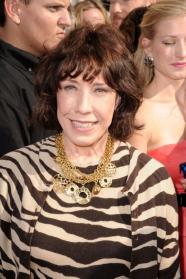 Mary Jean "Lily" Tomlin (born September 1, 1939) is an American actress, comedian, writer and producer. She has won multiple awards from many quarters, including Tony Awards, Emmy Awards, and a Grammy Award and has also been nominated for an Academy Award.

Description above from the Wikipedia article Lily Tomlin, licensed under CC-BY-SA, full list of contributors on Wikipedia.
2004 - I Heart Huckabees
2006 - A Prairie Home Companion
2006 - The Ant Bully
2009 - Ponyo (Gake no ue no Ponyo)
2018 - Spider-Man: Into the Spider-verse