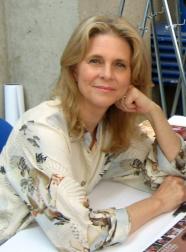 Lindsay Jean Wagner (born June 22, 1949) is an American actress. She is probably most widely known for her portrayal of Jaime Sommers in the 1970s television series The Bionic Woman (for which she won an Emmy award), though she has maintained a lengthy career in a variety of other film and television productions since.

Description above from the Wikipedia article Lindsay Wagner, licensed under CC-BY-SA, full list of contributors on Wikipedia.
2018 - Samson