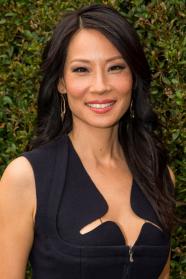 Lucy Alexis Liu (born Lucy Liu; December 2, 1968, height 5' 3" (1,60 m)) is an American actress, model, artist, and occasional film producer and director. She became known for playing the role of the vicious and ill-mannered Ling Woo in television series Ally McBeal (1998–2002), for which she was nominated for a Primetime Emmy Award for Outstanding Supporting Actress in a Comedy Series and a Screen Actors Guild Award for Outstanding Performance by a Female Actor in a Comedy Series. Her film work includes starring as one of the heroines in Charlie's Angels, playing one of the enemies of The Bride in Kill Bill, and appearances in Payback, Chicago, and animated hit Kung Fu Panda. In 2012, Liu joined the cast of TNT series Southland in the recurring role of Jessica Tang, for which she won the Critics' Choice Television Award for Best Drama Guest Actress. In 2008 she starred in her own television show, ABC comedy-drama, Cashmere Mafia, which ended after one abbreviated season. The show was one of only a few American television shows to have an Asian American series lead. She is currently co-starring in Sherlock Holmes–inspired crime drama Elementary, playing Joan Watson.

Lucy Liu was born in Jackson Heights, Queens, New York. In high school, she adopted her middle name “Alexis.” She is the youngest of three children born to Cecilia, who worked as a biochemist, and Tom Liu, a trained civil engineer who sold digital clock pens to make a living. Her parents worked many jobs when Lucy and her siblings were growing up.[5] Liu’s parents were immigrants from Beijing and Shanghai, and they met in New York. She has an older brother, John, and an older sister, Jenny.

Liu has stated that she grew up in a “diverse” neighborhood. She learned to speak Mandarin at home and began studying English when she was 5.She studied kali-eskrima-silat as a hobby when she was young. Liu attended Joseph Pulitzer Middle School (I.S.145), and graduated from Stuyvesant High School in 1986.When she was at Stuyvesant High, she went on an exchange program at Victoria Junior College, one of the top senior high schools in Singapore. She later enrolled at New York University and transferred to the University of Michigan in Ann Arbor, Michigan, where she was a member of the Chi Omega sorority. Liu earned a bachelor’s degree in Asian languages and cultures. Liu worked as a waitress at the Ann Arbor Comedy Showcase club circa 1988–89.
1999 - Payback
2000 - Charlie's Angels
2002 - Ballistic: Ecks vs Sever
2002 - Cypher
2003 - Charlie's Angels: Full Throttle
2003 - Party Monster
2005 - Domino
2006 - Lucky Number Slevin
2006 - 3 Needles
2007 - Codename: The Cleaner
2007 - Rise: Blood Hunter
2008 - Kung Fu Panda
2011 - Kung Fu Panda 2
2012 - Detachment
2012 - The Man with the Iron Fists
2016 - Kung Fu Panda 3