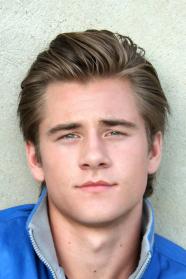 From Wikipedia, the free encyclopedia. Luke Aaron "Luke" Benward (born May 12, 1995) is an American teen actor and singer, best known for his starring role as William "Billy" Forrester in How to Eat Fried Worms and as Charles "Charlie" Tuttle in the 2008 Disney Channel Original Movie, Minutemen. He also played the role of "Nicky" in Mostly Ghostly: Who Let the Ghosts Out? and played Steven "Stevie" Dewberry in the film Because of Winn-Dixie. At the age 7, he appeared in Martina McBride's music video for "Concrete Angel".

Description above from the Wikipedia article Luke Benward, licensed under CC-BY-SA,full list of contributors on Wikipedia.
2006 - How To Eat Fried Worms
2018 - Life of the Party
2018 - Measure of a Man
2018 - Dumplin'