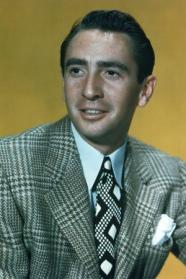 dward Macdonald Carey (March 15, 1913 – March 21, 1994) was an American actor, best known for his role as the patriarch Dr. Tom Horton on NBC's soap opera Days of our Lives. For almost three decades, he was the show's central cast member.

Description above from the Wikipedia article Macdonald Carey, licensed under CC-BY-SA, full list of contributors on Wikipedia
1943 - Shadow Of A Doubt