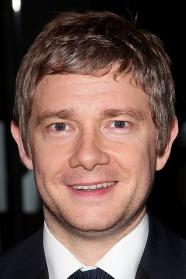 He is known for his roles as John in Love Actually, Tim Canterbury in the BBC's Golden Globe-winning comedy The Office, Arthur Dent in the film adaptation of Douglas Adams' The Hitchhiker's Guide to the Galaxy, Dr. John Watson in Sherlock and Mr. Madden in Nativity!. He has been cast in the lead role of Bilbo Baggins in Peter Jackson's two-part adaptation of The Hobbit. Description above from the Wikipedia article Martin Freeman, licensed under CC-BY-SA, full list of contributors on Wikipedia
TBA 2018 - Ghost Stories
2005 - The Hitchhiker's Guide To The Galaxy
2006 - Confetti
2006 - Breaking And Entering
2007 - Dedication
2010 - Wild Target
2012 - The Pirates! Band of Misfits
2012 - The Hobbit: An Unexpected Journey
2013 - The World's End
2013 - The Hobbit: The Desolation of Smaug
2014 - The Hobbit: The Battle of Five Armies
2016 - Whiskey Tango Foxtrot
2016 - Captain America: Civil War
2018 - Black Panther