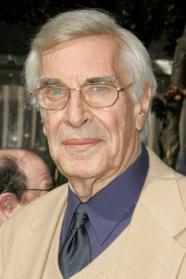 ​From Wikipedia, the free encyclopedia.   Martin Landau (born June 20, 1928) is an American actor. Landau began his career in the 1950s; his early films include a supporting role in Alfred Hitchcock's North by Northwest (1959). He played continuing roles in the television series Mission: Impossible for which he received Emmy Award nominations, and Space:1999. He received a Golden Globe Award for Best Supporting Actor - Motion Picture and his first nomination for an Academy Award for Best Supporting Actor for his work in Tucker: The Man and His Dream, and was also Oscar nominated for his role in Crimes and Misdemeanors (1989). His performance in the supporting role of Béla Lugosi in Ed Wood (1994) earned him the Academy Award, Screen Actors Guild Award and a Golden Globe. He continues to perform in film and television and heads the Hollywood branch of the Actors Studio. Landau was born into a Jewish-American family in Brooklyn, New York, the son of Selma (née Buchanan) and Morris Landau, an Austrian-born machinist who scrambled to rescue relatives from the Nazis. Description above from the Wikipedia article Martin Landau  licensed under CC-BY-SA, full list of contributors on Wikipedia.
1959 - North By Northwest
1963 - Cleopatra
1994 - Ed Wood
1996 - The Adventures Of Pinocchio
1997 - B.A.P.S.
1998 - The X-Files
1998 - Rounders
1999 - Edtv
2004 - The Aryan Couple
2008 - City of Ember
2009 - 9
2010 - Lovely, Still
2012 - Frankenweenie
2016 - Remember
2018 - Abe & Phil's Last Poker Game