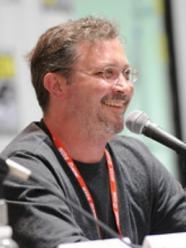 Matthew Gerard Maiellaro (Born August 17, 1966) is the co-creator and writer of the cult television animated Adult Swim shows, Aqua Teen Hunger Force and Perfect Hair Forever, and creator of 12 Oz. Mouse. He is a native of Pensacola, Florida, and a graduate of Pensacola Catholic High School.
Prior to his work on Aqua Teen Hunger Force, Maiellaro was a producer and writer for Space Ghost Coast to Coast since the show's inception in 1994. Maiellaro met friend and future writing partner, Dave Willis when Willis came on as a staff writer in 1995. The two have since made a few short independent films together, most notably the live-action short, A Day Off, which follows a Michael Myers puppet and documents what he does on his day off from murder.
In 2000, Maiellaro and Willis created a spin-off from Space Ghost Coast to Coast -- Aqua Teen Hunger Force. Seven years later, Maiellaro and Willis released a full-length Aqua Teen Hunger Force feature film on April 13, 2007. His writing is characterized by surreal humour and at times, a total disregard for traditional forms of storytelling.