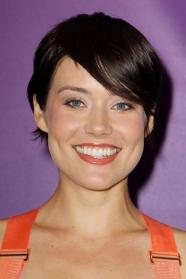 Megan Boone (born April 29, 1983) is an American actress. She is best known for her role as Junior Deputy District Attorney Lauren Stanton on the NBC television series Law & Order: Los Angeles, Boone will leave the series later this year due to a creative overhaul.
2009 - My Bloody Valentine 3-D
2012 - About Cherry
2014 - Welcome to the Jungle