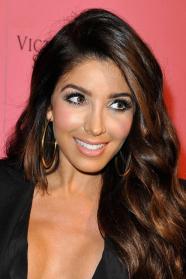 Melissa Molinaro (born 1982) also credited or known as Melissa S. or Melissa Smith is a Canadian, pop singer, actor, choreographer and model. She is perhaps best known for her reality TV appearances on Making The Band 3 and Pussycat Dolls Present: The Search For the Next Doll. She is currently recording her debut pop/dance album scheduled for 2011 release, recently co-starred in Dolph Lundgren's action film, Command Performance, and had a major role in Honey 2 (2011). She adopted her mother's maiden name Molinaro as her professional name. Melissa has received notable attention from her appearance in Old Navy's "Super C-U-T-E" commercial in 2011. The video for "Dance Floor", the first single from Melissa's debut album "The Love/Dance Project" features choreography by JaQuel Knight (whose credits include Beyonce's "Single Ladies") had its debut on YouTube on 24 February 2011.

Description above from the Wikipedia article Melissa Molinaro, licensed under CC-BY-SA, full list of contributors on Wikipedia. ​
2014 - School Dance