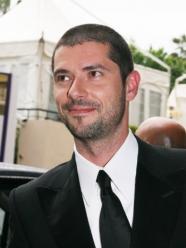 Melvil Poupaud (born 26 January 1973) is a French actor.
He was named after Herman Melville by his screenwriter mother. At the age of ten, he launched into acting with a role in La Ville des Pirates (1983), directed by Raul Ruiz. At the age of 15, he was nominated for a César. He has a daughter, Anna-Lisa.